Bouts Of Cool Temperatures Warn That Winter Is On The Way! 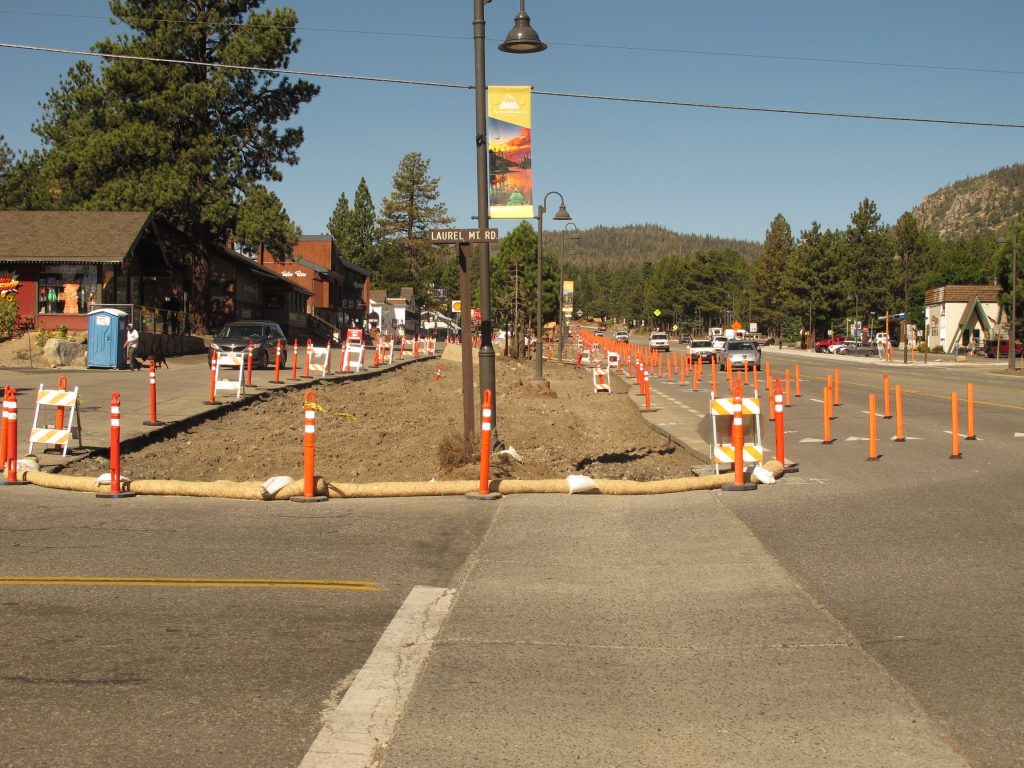 The Mammoth Lakes MLS is reporting 19 real estate closings (same as last period) ranging from a low of $175,000 to a high of $1,209,000. Of the 19 escrow closings, 16 were financeable properties and 12 were conventionally financed. More of that trend.  The three (3) least expensive sales were vacant residential lots. Three (3)  of the five (5) most expensive sales were Snowcreek condos.   The 10-year Treasury yield moved impressively upward by .4% to 1.903%. Mortgage rates moved quickly to follow (what a difference two weeks can make). Industry experts are referring to this as a “snap back” and they point out that snap backs can jump the yield by as much as 1%. To see the yield at ~2.5% in the next couple of months would be an impressive switch. How all of this will affect the real estate market is yet to be seen. Mortgage applications for new home purchases increased by 5% last week and were 9% higher for the same week a year ago. I hope they were able to lock-in their rates.

At the period’s end the condominium inventory is down 11 to 119. There were 15 new condo listings in the period and one (1) is already in escrow. The new listings are all over the board and the market needs condo inventory this time of year.

The inventory of single-family homes is down one (1) to 66. Even more price reductions after Labor Day Weekend in the < $1M price range. There will be more to come. There are six (6) homes listed under $600,000 with lots of lookers but no takers, yet.

The total number of properties in “pending” (under contract) in Mammoth Lakes is up nine (9) to 70 at period’s end. Of the 70 properties in “pending,” there are 26 in “Active Under Contract” status (formerly “back-up”). The total number of pendings in the aggregate Mammoth MLS (which includes outlying areas) is even at 89. So far the Mammoth market appears in a normal state for this time of year; declining inventory and increasing sales.

While it is still summer on the calendar the temperatures dropped significantly a couple of times during the period. Many local residents were tempted to turn on their home heat. There was frost on the roofs a few mornings and the smell of fireplace wood burning was in the air. There was light snow reported in Tahoe. Thankfully this weekend was warmer and there was a decent crowd in town in spite of no real special events. There isn’t any real evidence of fall colors yet. The long range forecast for the balance of September is a mix of cooler and warmer temperatures. But the short summer is getting shorter.

Last weekend’s Gran Fondo cycling event continues to grow. There were an estimated 1,800-2,000 riders this year. Cyclists and cycling teams were here training the week before and some lingered after the event. The 100+ mile ride starts in the Village and goes north on Hwy. 395 to Hwy. 120 south of Mono Lake and then almost out to Benton and back north of Crowley Lake on Benton Crossing Road. I was out on Main St. late Saturday afternoon and riders were still returning into town. The race starts at 7:00 am.

As soon as Labor Day Weekend was over the construction crews moved quickly to demolish the south side meridians between Main St. and Old Public. New sidewalks, lighting and planters are in the making. The last section on the north side is almost completed. Hopefully next summer the new landscape goes in on both Main St. and Old Mammoth Road and the central commercial corridor and entries to town can be something we can be proud of. But at least concrete is drought tolerant.

The Town’s fiscal year for TOT (bed tax) runs July 1 to June 30. Last week it was announced that last fiscal year the Town hit a record $20 million in revenues. That is certainly impressive. But the Town’s marketing budget is now at $10M per year. More and more people are questioning the math.

While the Ski Area described this summer’s Canyon Lodge improvements as mostly on the interior of the building, there is actually a large construction project occurring on the backside of the building. At the location of the rear entry (from the ski slopes) there is a large addition being built out of steel and glass. It will radically change this area. The whole addition is basically a new bar. Bars are a major addition to the overall Alterra plan.    Looking at the financial numbers of MMSA, the food and beverage component of overall revenue is consistently around 14%. In 2016 it was 15%. In 2005 the revenue was almost $13M. In 2017 it was almost $22M. But what is not in these statistics is the breakdown of food versus bar. I’m guessing the bar business is good, really good. The philosophy of 20 years ago with cheap season passes was that the skier who didn’t have to purchase a lift ticket had more money to spend on other things. If we follow the money in the summer of 2019, it looks like the new IKON Pass holders prefer the bar.

I sat through presentations this past week by nightly rental property management companies Vacasa and Turnkey. Both have entered the Mammoth market aggressively and competitively. Both are using the latest technology and have sound business plans. But my general take-away is that this business is becoming increasingly mature and locally  competitive. Airbnb is still in the middle of it all. But profit margins for these operating companies are becoming tighter with more services and more competition.   Companies like Vacasa, with a large international presence may be able to withstand those tighter margins. Vacasa has a new integration with Google that will bring Vacasa managed properties right in front of people searching specific travel destinations. That may become profound. But Turnkey has a large presence in Lake Tahoe and with California based mountain resort visitors. Other smaller local companies will have to provide greater service andproduce solid revenues for their owners. It will be interesting to see who survives.

For the first time in several weeks there was no firefighting equipment (helicopters, etc.) at Mammoth Airport. This has been one of the most smoke free summers of the past decade. Let’s hope it is a trend.

I spoke with a “senior underwriter” (he called me) for a SoCal bank this past week about potential financing on some new townhomes to be built adjacent to the Obsidian fractional project. This project is off of Meridian Blvd. and fronting on the Sierra Star golf course with views up to Mammoth Mountain. The units are 2500 square feet and projected to sell for $1.2M. I was glad to answer his questions but the discussion quickly became rather unintelligent. Following the conversation I wondered about the state of real estate development lending; If this is the caliber of decision makers at the banks today, the industry is in trouble.

Eight of the 19 sales for the period were condos selling below $500,000. Five of the 19 sales were properties selling over $900,000. Two of those higher-end sales (both ~$1M) were beautifully built and well appointed single-family homes with valuable furnishings included in the sale. There is no way to replace them for the selling price. Which is strange because…

Three vacant lots sold during the period and all three are upsloping lots, which prove to be far more expensive to build on. One previously mentioned upsloping lot on Canyon Blvd. has been a classic example; the owners paid a low price at purchase but have now spent a small fortune on excavating and building massive retaining walls and foundations. At least they are finally in the framing stage — after almost two years of construction. 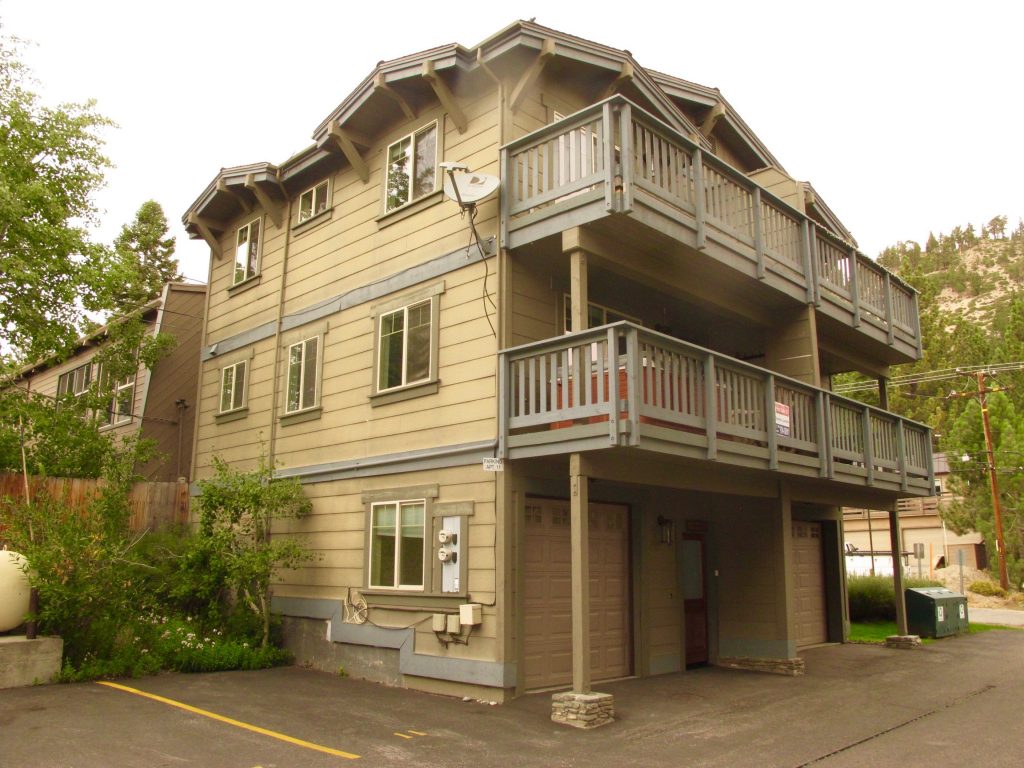 Here’s a modern built 2 bedroom / 2 bath townhome with a 1-car garage that is great for local living or a nice second homeowner crashpad. Nightly rentals are not allowed in this unit. The interior has been redone with new paint, new countertops, new appliances, new wood flooring and carpeting, and lots more. It even has its own private spa on the second level deck. The property has forced air gas heating for easy warmth. There is a washer/dryer. Very low HOA fees ($250/mo). South orientation. Extra guest parking spots. Centrally located to commercial districts and Red Line shuttle.  Sold furnished and ready to move in to!
Listed at $449,000

One of our clients had a surreal experience during the period with the Town’s Finance Department over unpaid TOT. He received an imposing notification in the mail that he owed over $60,000 in unpaid taxes and fines on his STR property. That was rather disturbing especially since he had a management company that was suppose to be collecting the bed tax and remitting to the Town. The fact that the property recently closed escrow made it even more troublesome.

After days of turmoil, the result was that the specific taxes (TOT and TBID) had in-fact been collected and remitted to the Town. The Town staff had been operating on information provided by an anonymous TOT complaint/whistleblower (which the Town encourages). The Town’s “research” came up with our client and his property. But they apparently failed to do much verification. They had the wrong property and the wrong owner. The complaint was based on another, very similar property that was being privately marketed strictly through an Airbnb account and not a local agency. The Town made a big mistake and caused the former owner (and others) a great deal anguish and wasted a considerable amount of time.

But through it all there are some take aways;

• The Town Finance Department clearly stated that they are “ramping up on investigations and violators” of the TOT regulations and that sending dramatic letters including citations, municipal code sections, estimated rental revenue and TOT spreadsheets, etc., are designed “to get a reaction” (even if they haven’t verified the information and are sending it to compliant property owners?).

• Rental websites like Airbnb and VRBO will come under increasingly greater scrutiny for potential violators. The independent renting owners not utilizing local agencies are the most likely to be skirting their tax collections and remittances.

• The TOT section of the Town’s ordinances clearly states that they (the Town) have the right to request and obtain the rental records for any property for the past there years. The local agencies understand that they need to be cooperative and apparently are.

• According to the Town, if an owner does not remit TOT on his/her rental property and subsequently sells the property before the Town can lien the property, there is nothing the Town can do to collect the un-remitted taxes.

• The Town is going to increasingly encourage whistleblowers to file official complaints about unreported rental activity.

The Smoke Is Gone And The Ski Runs Are Open!   Market Summary  November 1 to November 15 The Mammoth Lakes MLS is reporting 28 real estate closings for the period ranging from a … END_OF_DOCUMENT_TOKEN_TO_BE_REPLACED

The Smoke Lingers But Visitors Are Anxious To Come And Play!   Market Summary  September 27 to October 18 This report is for the past three weeks. The Mammoth Lakes MLS is … END_OF_DOCUMENT_TOKEN_TO_BE_REPLACED