The Mammoth Lakes MLS is reporting 13 real estate closings ranging from a low of $304,000 to a high of $1,200,077. This period last year there were 23 closings in Mammoth Lakes. Of the 13 escrow closings, all 13 were financeable properties and 10 were conventionally financed. Five (5) of the 13 sales were condos priced under $500K. The 10-year Treasury yield dropped below 2% a couple of times during the period but settled just slightly down at 2.068%. Lenders are reporting great 30-year rates under 4%. So far it appears the drop is nudging sales a bit but refinance applications have jumped significantly.

At the period’s end the condominium inventory is up six (6) to 109. There were 19 new condo listings in the period and two (2) are already in escrow. It is certainly normal for condo inventory to rise this time of year. Inventory typically peaks around Labor Day weekend. Many of these new listings appear to be priced beyond the upper range of recent values. We’re going to see what the market will bear this summer. There are now seven (7) condos listed under $300,000 and another 26 listed between $300-400,0000. This time last year there were 86 condos on the market but a total of 38 listed under $400,000

The inventory of single-family homes is up two (2) to 40. There are now six (6) homes listed under $700,000 including two we saw last summer and two that are new to the market. There are also a handful of other new listings that we saw last summer. And oddly, there is considerable interest in luxury homes in the ~$1.6M range. This time last year there were 42 homes on the market.

The total number of properties in “pending” (under contract) in Mammoth Lakes is up six (6) to 56 at period’s end. Of the 56 properties in “pending,” there are 25 in “Active Under Contract” status (formerly “back-up”). The total number of pendings in the aggregate Mammoth MLS (which includes outlying areas) is down eight (8) to 79 and that includes three (3) cheap lots in June Lake.  This time last year the respective numbers were 53 and 92.

The Mammoth Motocross event began this weekend with the amateur racing and the professionals will be here all week with major races next weekend. This event has been running since 1968 and is the “oldest continuous motocross event in the United States.” We can thank Dave McCoy for that. Historically it marks the kick-off to summer. The motocross crowd has traditionally made this more than a racing event. They come with extended family members and try to incorporate “Mammoth” experiences with the racing.

As the Motocross event wraps up next weekend we roll right into 4th of July week and with the 4th falling on a Thursday it is bound to be packed with second homeowners and visitors. But there is already a substantial number of non-motocross visitors in town.

While it is now summer on the calendar the weather remains on the cool side. But reports are that the cooler weather has left the skiing on Mammoth Mountain in wonderful shape, at least in the spring skiing windows on the open runs. Between this spring (and now summer) ski season and the IKON Pass, 2019 will go down as a banner ski year here in Mammoth….The Forest Service will finally allow vehicle traffic into the Lakes Basin tomorrow morning (Monday the 24th). I’m sure some large motorhomes will be caught off-guard at the lack of accessibility. The lakes, creeks and stream are all overflowing at this point. Maybe it is better that it hasn’t warmed too much. The region should be a peak run-off for a month or so. Hopefully everyone stays safe.

Last weekend’s Yoga Festival celebrated its second year and this event has some serious potential for growth. One of my clients remarked about “the amount of spandex” in town. And lots of people (mostly women) wandering around town with rolled-up yoga mats over their shoulders. It will never be Bluesapalooza but it is a nice niche in a slower tourism season.

The Town’s information flow over the planning efforts of The Parcelmay be a bit overboard. I can appreciate that they are trying to get people engaged in the process and are looking for feedback from people who normally aren’t expressive or involved. I’m not sure tons of mailings and advertising are going to be effective. There is an old axiom in the real estate business that you “can’t advertise the market into activity.” I get the feeling the Town is just trying to buy some time until theyfigure out what to do. And again, the rules of the game have changed; the State is promoting workforce housing and supposedly has dollars to infuse, but the last round of federal tax changes have removed some of the corporate incentives to be involved in workforce housing. Push may come to shove. The Town may have to increasingly re-allocate some of its bed tax (TOT) windfall into housing.

The new Ice Rink/MUF “Mammoth Recreation Center” proposal hasn’t been in the news flow the past two weeks. But as it moves back into the required public process it will. I’m sure the zealots feel quite confident about the new project proposal but the reality of a GIANT tent on the site may not be well received by many in the public and certainly not the surrounding property owners. It might even get entertaining. For the proponents it is becoming an almost Machiavellian experience.

Many of the 1970’s developed condo projects have tennis courts. It was the “thing” back then (today developers would balk — that is room to add more condos!). For the past decade these courts have had almost no usage. HOA Boards have questioned the maintenance costs versus usage, etc.. And today they are valuable for snow storage. Just the other day I noticed the Wildflower condo project had completely removed the fencing and dug out the hard court surface. And speaking with the manager at Château Sans Nom, their tennis court is going to be converted to a sand volleyball court and horseshoe pits. I can see other HOAs heading this direction.

An interesting article from Lending Tree about Mammoth’s customer base; “The Most and Least Debt-Ridden Places in California.”The authors studied non-mortgage debt by cities. Auto debt is predominately the largest source of debt. Generation X shoulders the greatest amount of debt in most places. So the top three places with the greatest debt; Temecula, Santa Clarita and Yorba Linda. Newport Beach is 15th, Burbank is 23rd. The top three places with the least amount of debt; Santa Cruz, Cupertino and Milpitas. Santa Monica was in the top 25 of the Least Debt-Ridden Places.

And speaking with a long-time local contractor this past week, he told me that this winter lingered on for so long that he put his own For Sale sign on his house so it would be there when his wife got home one night. He was trying to tell her something. He said the sign stated that the home sale included eight snow shovels and two snowblowers.

Two more of the Mountainside townhomes closed in the ~$1,200,000 price range. The right-at Canyon Lodge location has captured the buyer’s attention. I hope they have a solid HOA budget for trucking snow.

The sale of the home at 188 Hidden Valley Road for $1,055,000 surprised me a bit. This 3800 square foot home is right on the Sierra Star golf course and was originally listed at $1,525,000. It was beautifully furnished and had a large game room downstairs. Sold at only $277 per square foot. The solid activity in the higher-end residential did not carry through to this property. 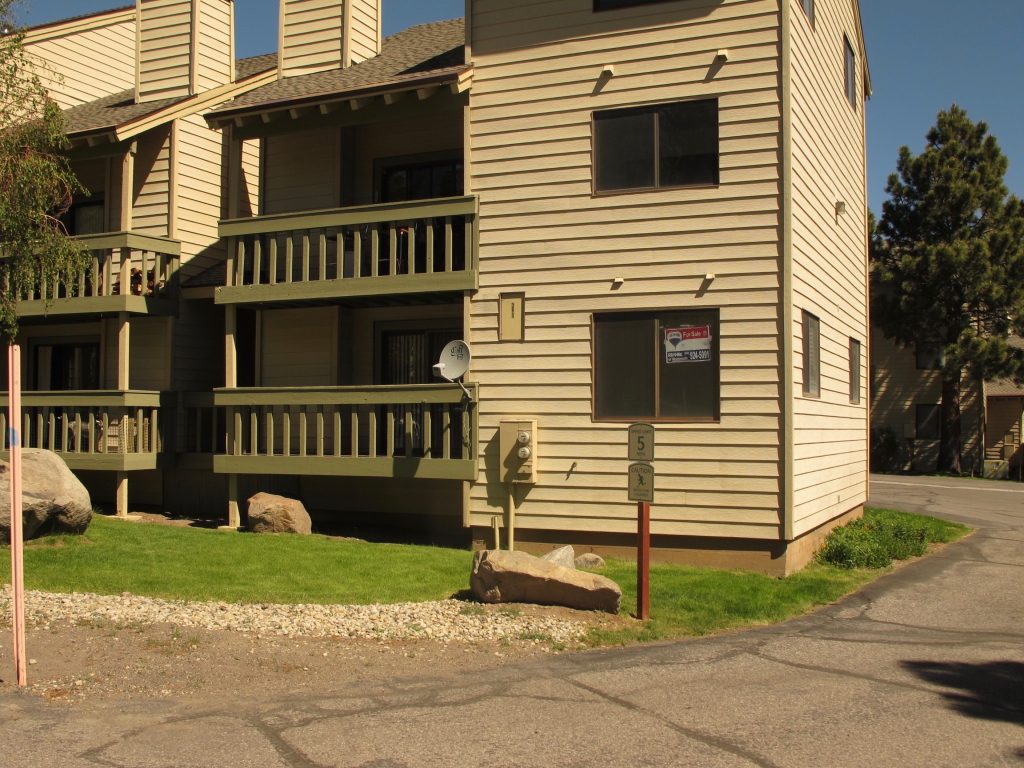 Bank owned/REO properties come around now and then these days. And here is an example of how the sale process will be handled for many of them (whether it makes sense or not). This is a 2 bedroom /1 bath at La Vista Blanc. It has been cleaned up somewhat and they put new carpet in (they had to). But the sale will be handled through an online auction. You can bid on it yourself (even though I can help you) at Xome.com. Even though it may not be a live auction yet you can still bid on it. The problem with these auctions is that the bidders eventually feel like they are bidding against the seller. To get good deals a buyer has to be persistent and patient. Casual bidders move on. There is also a 5% “buyer’s premium” (??) so add 5% to the bidding price. Someday they will figure out that this is an inefficient and ineffective method of liquidating these assets.
Listed at only $249,000

One of my newsletter readers asked to discuss the Mammoth Wounded Warrior Centerand specifically the proposed location. The photo on top of this newsletter is the location which is at the bottom of the property zoned Public Institution off of lower Meridian Blvd. It is below the Cerro Coso college building and right next door to the student (and now Hospital) housing facility. The proposed Mammoth Arts & Cultural Center (being driven by the Mammoth Lakes Foundation) is across the street.

The Center will offer housing and communal living arrangements for disabled veterans taking part in the many programs offered to them by Disabled Sports of the Eastern Sierra (DES). The setting, sun and views from this location are as good as they get in Mammoth. The Town’s bike path runs through the site and offers access back into town or further into the natural areas surrounding town. Ultimately, the location can offer easy access to education opportunities at the college and cultural/social opportunities at the Cultural Center. The Mammoth library facility is also close by.

All of this land was set aside years ago by the Forest Service for public institutions. The community college affiliation was a big deal when it happened and philanthropy from Dave and Roma McCoy built the existing college center. Online schooling has inevitably impacted the need for expansion but there is plenty of room for other public facilities around the site. The college facility itself will likely evolve into different uses and curriculums. Maybe even benefitting those housed at the Wounded Warrior Center and participating in the DES programs.

Mammoth is certainly a unique (and almost perfect) place to offer these opportunities to veterans. DES is already a widely recognized organization for their work with disabled veterans. The establishment of the Wounded Warrior Center will launch the entire program. It is certainly a philanthropy worthy of this area.

Looks Like Mammoth STRs Have Green Light As Of June 19! Market Summary:   May 24 -- June 7 The Mammoth Lakes MLS is reporting five (5) real estate closings for the period ranging from … END_OF_DOCUMENT_TOKEN_TO_BE_REPLACED