Mammoth Settles Into The “Dog Days of Summer.”

The  Mammoth Lakes MLS is reporting 16 real estate closings in Mammoth for the period ranging from a low of $200,000 to a high of $1,300,000. Of the 16 closings, all 16 were financeable properties and eight (8) were conventionally financed. Ten of the 16 sales were condos selling under $320,000. The high sale of the period was the lots at (37) Old Mammoth Road that is the proposed location of the new Grocery Outlet. So it looks like the obstacles have been overcome and the project will move forward. These lots have an interesting history including Mammoth’s first fire station, the legendary Nicolosi’s restaurant and eventually the original Grumpy’s sport bar and outdoor volleyball courts.

The weather has been perfect in Mammoth; not too hot with only a hint of coolness. Summer tourism is alive and the town faces Bluesapalooza week this upcoming week. This has become the busiest week of the summer. The past few years have experienced serious episodes of forest fire smoke. Hopefully the beautiful clear conditions remain. The organizers and patrons deserve it.

Most local residents are showing signs of weariness, or is that wariness? The brutal winter and now the demand for attentiveness to the necessary summer repairs and maintenance is compounded by a lack of available labor and a very tight housing market. Anybody trying to “push” projects are likely to face rejection. But some haven’t got the message.
The two contractor quotes from a couple of months ago are coming to fruition; “Nothing is going to happen fast” and “Lots of things that need to be fixed won’t be fixed before it snows again.” And some second homeowners are coming to town and finally realizing they have damage. Others are coming to the realization that Mammoth has limited workforce. And in ~45 days there will be a new round of anxious winter-oriented buyers looking to secure their place for the upcoming snow season.
Meanwhile the amazing runoff, high lake levels and flooding continues. The Ski Area plans to finally stop offering skiing as of August 6. Thankfully. Enough is enough.
Other than solid tourism and special events and plenty of work for local residents things are pretty quiet in Mammoth. There is no “new” information on the KSL/Aspen/Intrawest/Mammoth conglomeration merger. The Town front is quiet but a controversy is brewing. The shortage of housing is now critically impacting many employers in the community; from hospitality and restaurants to construction and maintenance to retail and on-and-on. It is impacting employers and is beginning to impact customers and the level of service on almost all levels. The Mammoth Lakes Fire Dept. is concerned about having enough volunteers.
Meanwhile the Town is spending millions on marketing and facilities like a new ice rink and they want new administrative offices and a new airport terminal too. The Town Council recognizes the housing problem but the public outcry to make it a priority is clearly beginning. Currently there is not sufficient political will to address the housing issue but the pain will eventually create it.
The 24-acre “Shady Rest” parcel in the middle of town is zoned for affordable housing. The current owner wants to do a mixed-use development that would included deed restricted units and “market rate” units. The property has been the subject of closed session meetings with the Council and the owner’s legal council has been spotted in town. We’ll see what happens. The past plans for the parcel include zero-lot-line (duplex) homes to meet the middle-income demand in town and 3-4 story building with smaller apartments that would be located closer to Main St. and public transportation.
Other options for land acquisition include condemnation of “lingering” parcels that remains partially developed or developed but abandoned. There is even talk of a long-term plan to engage the Forest Service in a possible land exchange. 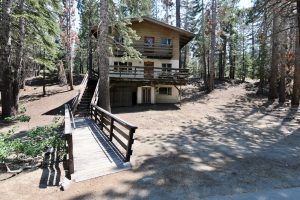 With the low-end of the single-family home inventory experiencing significant demand, here is a new one that will get attention. And this is somewhat unique and special. This home was built in 1964 and has had only one owner the entire time. The home is 5 bedrooms / 2 baths with a basement area that isn’t part of the “living” square footage but has been used for a game room and storage.
The home is in near original condition with beautiful pine paneling and wainscoting and hand carved ceiling beams. This could make a fantastic restoration/preservation project. The home has forced air gas heating and a wood burning fireplace with insert. There is plenty of room to add a garage or make significant additions.
The west property line borders lots in the North Village Specific Plan and it is a 4-5 minute walk to the Village Gondola and the Village fun zone.
Listed at $499,999

As part of Mammoth Lakes Housing’s efforts to influence Mammoth’s public officials and the Mammoth Lakes Community Housing Action Plan 2017 working group, they hosted Dr. Bill Hettinger last week. His book Living And Working In Paradise describes the failure of market housing in resort communities and offers strategies and solution to the problem. Dr. Hettinger’s website has some interesting information.
​​​​​​​He does a great job describing the problem for the inexperienced. He explains the problem with local residents competing with second homeowners. Mammoth is a classic case. Second homeowners (and retirees) derive their income from somewhere else, a wealthier place. They come to a place like Mammoth and consider real estate to be rather inexpensive. That drives the price up and the local residents/workers can’t afford property. Essentially, an out-of-town economy (southern California) sets the price for the homes in Mammoth.
What makes matters worse, and Mammoth is a perfect example, is there are often natural barriers to how much land can be developed (think an island) in pristine natural areas. Mammoth has natural barriers but also very limited private ownership of land. The surrounding National Forest is not going to be sold away from the public. And the land exchange process is lengthy, expensive and may not be successful. And California’s environmental and land use regulations have become another barrier.
Because of these conditions, developers and builders focus on the larger more expensive properties that appeal to the wealthy second homeowners (just drive around Mammoth and you will see that concept in action). The builders simply aren’t interested in building smaller and affordable properties.
All of this ultimately creates a dysfunctional community that simply serves second homeowners and visitors with minimal community involvement and participation.
The solution to these problems requires intervention by the local government and agencies (Mammoth is clearly at a tipping point). It begins with acquiring land and changing regulations. And pushing more housing units into commercial zones and incentivizing more “in-law”/caretaker units in the residential zones. And creating more incentives and opportunities in new development.
​​​​​​​   ……Mammoth’s second homeowners and local residents will likely see many new and extreme pushes into creating housing opportunities in the near and mid-range future. It has to happen.
​
Thanks for reading!

Mammoth Goes From Serene, To Weird, To Closed!   Market Summary:   March 1 -- March 15 The Mammoth Lakes MLS is reporting 18 real estate closings for the period ranging from a low of … END_OF_DOCUMENT_TOKEN_TO_BE_REPLACED

The Super Dry February Ends With A Teaser! Market Summary:   February 16 -- March 1 The Mammoth Lakes MLS is reporting 27 real estate closings for the period ranging from a low of … END_OF_DOCUMENT_TOKEN_TO_BE_REPLACED