The Heat And Virus Drive A Massive Crowd Into  Mammoth!! 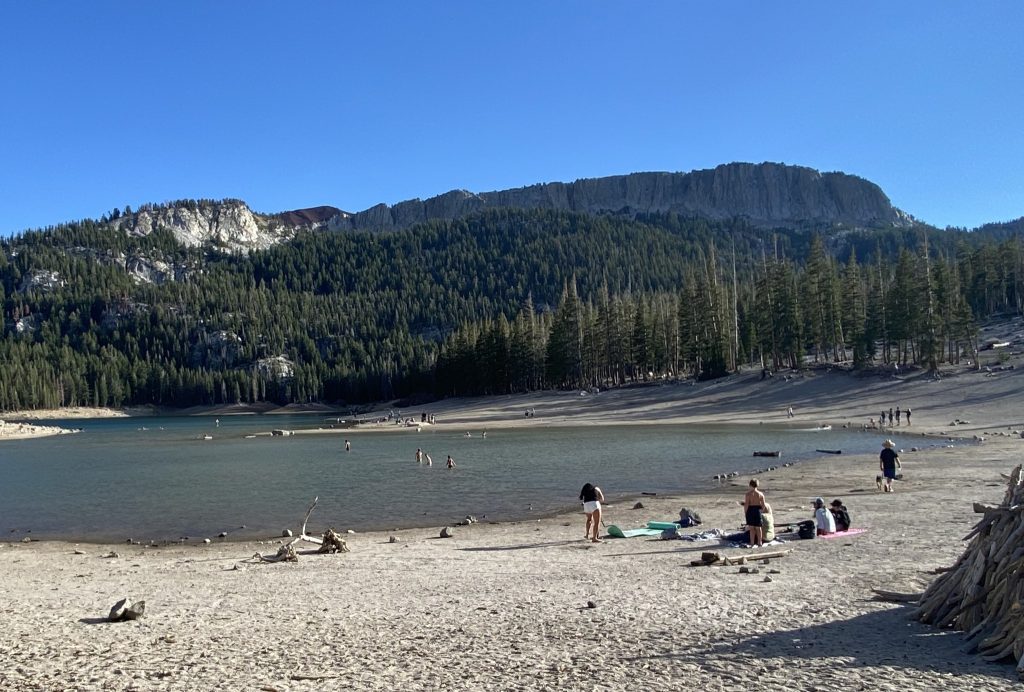 The Mammoth Lakes MLS is reporting 17 real estate closings for the period ranging from a low of $340,000 to a high of $1,365,000. All 17 closings were financeable properties and 11 were conventionally financed. There were four (4) more Snowcreek properties closed including the high sale for the period. There were eight (8) condo closings under $510,000. One small A-frame that had been on the market for months closed at $435,000. The 10-year Treasury rate was rather stable but ended up slightly down to .628%. The mortgage industry continues to report high volumes of business for both refinances and purchases. New loans can be funded in as little as 15 days. Amazing.

At the period’s end the condominium inventory is down 13 to 106. There were 20 new condo listings brought to the market during the period and six (6) have already gone to escrow. My guess is that there are likely to be another dozen or more condos that have offers and are currently being negotiated. I know there are four on my desk.

The inventory of single-family homes is down five (5) to 35. A few homes in the lower end of the market ($600-900K) that have been on the market for awhile went to escrow. This segment of the market remains quite price sensitive. There are lookers in the higher end of the residential market but most of this inventory is not moving.

The total number of properties in “pending” (under contract) in Mammoth Lakes is up another 25 to 100 at period’s end. But that includes 11 new reported sales at the “540” project under construction on Old Mammoth Road. It also includes eight (8) Obsidian Villas units that don’t even have foundations poured and three (3) that are still 45-60 days away from completion. Two Obsidian Villas listings were withdrawn during the period. Of the 100 properties in “pending,” there are 45 in “Active Under Contract” status (formerly “back-up”). The total number of pendings in the aggregate Mammoth MLS (which includes outlying areas) is up 38 to 145.

The Mammoth region lulled after the Independence Day holiday but the summer heat in the lowlands drove a big crowd into town this past week. I’ve heard many local residents comment that driving to Carson City to shop for groceries is a growing consideration. And gasoline is a dollar cheaper than Mammoth. The closing of indoor dining has pushed even more tables into the outdoors and the weather has been quite perfect for it. Large to-go waiting lines are common at various establishments, especially in the early evening. Overall the crowd is fairly well dispersed which is typical in the summer. The Lakes Basin is a madhouse most days.

Mammoth continues to mirror much of the rest of the country in virus testing. Some days this last week there were upwards of 200 tests reported and positive cases have jumped locally in the past few days. One thing I see in the data is that more and more younger people are being tested. Rumor is that a couple of restaurants may be connected to a significant portion of the new positive cases. But nobody seems overly concerned, at least for now. Since Mammoth has re-opened there have been 10’s of thousands of visitors move through town. Masks or not, everybody seems to be going about their business. And nobody seems to be missing the special events.

The Town Council made moves during the period to begin the process of bringing the Town’s marketing budget down to a reasonable level. They are listening to the public sentiment (including my own writings). They still plan to spend plenty but they have sent the message that big spending days are likely to be over. Maybe this is one silver lining to the pandemic for the community. If the large volume of visitors continues through the summer and into the fall, the Town bed tax coffers actually have the possibility of recovering.

Also on the Council’s agenda was the forced demolition of the old La Sierra building on Main St.. Finally. This historic building was once a vast raging nightclub. The Mexican restaurant was just for looks. The heyday was a little after my time but I remember watching a couple of Super Bowls there. It was owned by one of Mammoth’s old and notorious citizens who sold the property to development investors who were going to hitch a ride on the North Village boom of the mid-2000s. He was just one of many old-timers who cashed out during that cycle. The building itself has become a Main St. eyesore including occasional graffiti and home to various vagrants. But now the asbestos removal is scheduled to begin this next week and demolition in September. Maybe it will motivate the Council to address a couple of other abandoned properties.

I’ve been asked by a long-time Mammoth property owner (and attorney) to be an expert witness in his own personal case. Apparently he owns a downstairs 1 bedroom condo and the new owner of the larger unit above installed hardwood floors in their unit and they are now doing substantial STR business. He says the noise transference is intolerable. He spent time asking the upstairs owner to do something about it and they declined. So he has filed a lawsuit against them and they are in the discovery phase. The upstairs owners are fighting it and have hired a local attorney. I’m guessing they will spend 10 times on attorney’s fees what it would cost to replace the flooring……and more and more local agents are using a relatively new disclosure form called Buyer’s Homeowners’ Association Advisory — #7 covers “Noise” including the HOA restrictions on certain types of flooring.

Mono County received their certificate of occupancy for their new administration building next to the hospital during the period. For a “budget” building it is pretty nice. They utilized the solar aspect nicely. The employees are moving in. The County attorney who advises the Tax Appeal Board was very happy about his new digs. Most are moving out of the Sierra Center which is slated to be renovated into a 160 room hotel. Others are moving out of the Minaret Village above Giovanni’s. Meanwhile the real estate industry as a whole is anticipating a glut of office space as the work-from-home trend expands.

The old Slocum’s building was put back on the market and is already in escrow. It will be interesting to see what happens there. It’s hard to fathom anybody wanting to get into the restaurant business right now. Or retail. But the kitchen has real value, because I expect more and more food trucks in Mammoth. The Town Council seems committed to help small businesses in any way possible. They will bend the rules to allow more food truck operators. This could be a good thing. The popular Delicious Kitchen group who were in the Sierra Center are opening in the Kittredge parking lot.

A top floor 1-bedroom in Grand Sierra Lodge closed for $419,000. Seems like a good price for the buyer. Was this a Covid-panic deal or have the 1-bedroom Village values plateaued and moved downward? These units have performed very well in the past 24 months, both in rental income and values.

The big Lodges floorplan right on the golf course finally sold for $1,365,000. Once it was in escrow it could have sold to a number of other buyers. Apparently, buyers from Obsidian Villas are looking for other similar properties.

Besides the four (4) Snowcreek closings there were three (3) condo hotel closings. This may indicate that condo hotel properties will remain popular.

Here’s a modern townhome with a very different configuration; 1 bedroom / 2 baths and a 2-car garage. The property features forced air gas heating, gas water heating, gas cooking and two gas fireplaces. Super clean condition and sold fully furnished. Top floor is a deluxe master bedroom or can be split into two rooms or configured however. There is laundry in the garage. Sunny southern exposure almost all day, light and bright. Close to the Red Line shuttle and Snowcreek Athletic Club. Low HOA fees. Ideal property for permanent, efficient living or as a second home “crashpad.” Here’s a link to the video tour.
Listed at only $459,000

• Many readers commented on last issue’s furniture and personal property escapades and woes in Mammoth real estate transactions. During the period a seller who had closed escrow realized he had left a few bottles of wine in the property that he considered as “exclusions” to the agreed upon inventory. The new owners had already taken possession and “all” of the keys and garage door openers were passed to the new owner. But it appears the new owners installed cameras at the property but hadn’t re-keyed the property (even though they were advised to). You can figure out what likely happened. The old owner got busted by the new owner and they weren’t happy about it. They said they were going to file a police report for “breaking and entering”……

• Airbnb was in the news during the period and it wasn’t positive. The company asked the public to make “donations” to Airbnb hosts who were struggling due to the pandemic and lockdowns. Social media erupted with almost 100% negative comments towards the concept. I’m glad it wasn’t my idea.

• One thing I have been dealing with lately is marketing “dog damaged” properties. The scratches are mostly on the lower parts of doors but can also include flooring and other areas of the property. Property owners may believe this damage is inconsequential but trying to sell a property with this type of damage can compromise the marketability and value by thousands. Sellers beware.

• According the the Mortgage Bankers Association, mortgage delinquencies recently rose to a record pace of 3.4% (the peak in 2008 was 2.0%) and 8.2% of all mortgages are in forbearance. Meanwhile the California Legislature is working on finalizing AB-1436 which will give tenants affected by the pandemic all sorts of rights and protections and will equally afford landlords mortgage forbearance and protections from foreclosure. Interesting time to be landlord.

Thanks for reading!  Stay healthy!

Mammoth Remains Locked Down Amidst Summer-like Weather. Market Summary  January 3 to January 17 The Mammoth Lakes MLS is reporting 31 real estate closings for the period ranging from a … END_OF_DOCUMENT_TOKEN_TO_BE_REPLACED

The Most Subdued Holiday Period In Decades, New Snow Coming And IKON Blackout Over!   Market Summary  December 13 to January 3 This report is for the past three weeks. Not only … END_OF_DOCUMENT_TOKEN_TO_BE_REPLACED