Another Dump But More Snow Needed Before The Holidays, Real Estate Slows A Bit… 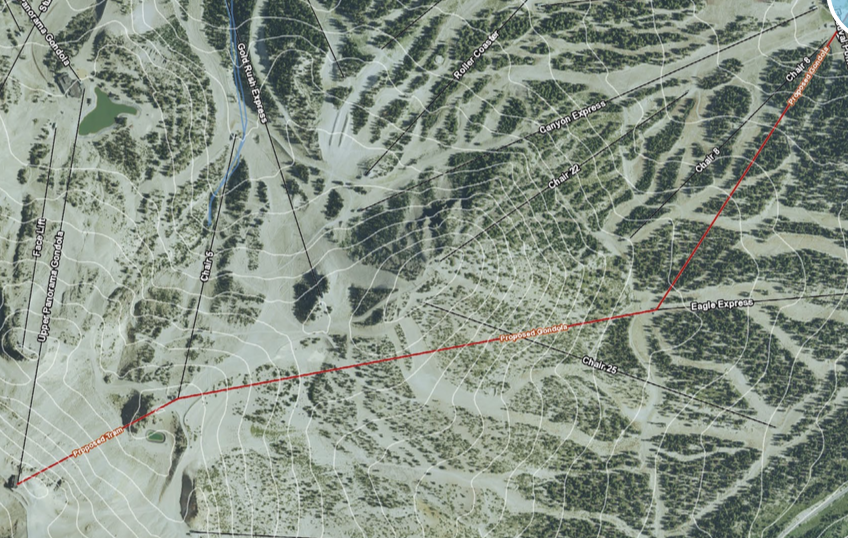 The  Mammoth Lakes MLS is reporting 16 real estate closings in Mammoth for the period ranging from a low of $185,000 to a high of $1,250,000. Of the 16 closings, 13 were financeable properties and seven (7) were conventionally financed. More of the same in the condo segment; six (6) of the sales were condos selling between $400,000 and $450,000. And two $1M+ home sales during the period. Higher selling prices are noted throughout the spectrum of Mammoth real estate.

At the period’s end the condominium inventory is down 12 to 52 with only three (3) units listed under $329,000 and only 17 listed under $400,000. There were seven (7) new condo listings in the period and three (3) are already under contract and in escrow. Some of the decline in inventory was the cancellation of  listings. These included units that are booked heavily in the next 45 days. With the prime rental season directly in front of us, most potential sellers will now wait until next year.

The inventory of single-family homes is up one (1) to 35. With a recent price reduction on one home, there are now four (4) homes listed under $729,000. There are two homes that have been on the market for over 600 days.

The total number of properties in “pending” (under contract) in Mammoth Lakes is down one (7) to 57 at period’s end. Of the 57 properties in “pending,” there are 44 in “Active Under Contract” status (formerly “back-up”).  The total number of pendings in the aggregate Mammoth MLS (which includes outlying areas) is down 13 to 96. A December real estate slow-down is typical, but many hungry buyers will still be looking.

Another storm rolled through Mammoth at the end of Thanksgiving weekend and the skiing was exceptional on Monday and quite good the balance of the week. Snow coverage remains thin on the east side of the Ski Area and with a high pressure currently building in for an extended period, the holiday ski conditions aren’t guaranteed to be excellent. But that means the holiday period is likely to be stormy, and that can work well. In the meantime, a patch of warm and mild weather will be welcome to those construction crews trying to complete projects including some of the destruction remaining from last winter.
The much needed completion of the east side gondola system is on perfect display right now. The Thanksgiving crowd and the powder day spill-over were all funneled into the Main Lodge area parking and access. Not only was it congested but sometimes down-right dangerous with eager skiers and snowboarders trying to park, walk to the chair or shuttle stop, all on sometimes icy roads and parking, etc. It certainly didn’t feel like a “resort” experience — not for anybody.
The completed gondola system would allow access from both the Village, Canyon Lodge, and Eagle Base to the top of Chair 5 or to the top of the Mountain. From there a variety of well covered runs could give access to the balance of the open lifts and terrain. It would simply eliminate the chaos MMSA has experienced in the past two weeks. Following my Real Estate Q&A that appeared in The Sheet Thanksgiving weekend, I had several questions about just where the gondola extension goes. So I have included a diagram of it above for my readers (this is from the Hart Howerton “Taking Action” plan). The extension is in red. It connects the Village gondola at Canyon Lodge to the top of Eagle Express (designed to be a gondola) and from there it connects to the new flat area at the top of Chair 5 and then to the top of the Mountain. That has been the plan for almost 20 years. The photo from the blogpost is from an Intrawest “story board” used for marketing back in the early 2000’s. Many people bought properties with this vision in mind….
The Ice Rink/MUF is currently on hold due to incomplete construction estimates and a final vote of approval from the Town Council. Recent Council documents are now estimating the cost at $12,000,000 with $8.6M in borrowed money and cash allotted to the project. But we are waiting for the final cost of the new police station to get a true idea of how far off this architectural firm is on their estimates. If the end price for the police station is near $4M (it was $3.2M at last accounting) then they will be off by nearly 100%.
Once Mammoth gets past the holidays there will be a five month drive towards a local election of new Council members. Three seats are up and one incumbent member is committed to running, one is not, and the third is highly unlikely. The two not running split the vote on the ice rink project. So the ice rink may (will) become the hot issue of the upcoming election. The grass roots group Mammoth Voices is already preparing community members for a higher level of education about local issues and how politics works and potentially generating candidates for this upcoming election.
The community is going to be asking these candidates if spending $15-20 million on an ice rink is the highest and best usage of the money. Especially in light of the serious housing crisis in town. Some simple math shows that once the Shady Rest parcel acquisition is completed, that $15M could build ~40 middle income affordable homes on a section of the parcel alone. That would be profound. These would most likely be zero-lot-line homes with private garages. This is what was envisioned back in the early 1990’s. But these homes could also be built with State grant monies and/or could also provide a considerable revenue stream. The parcel can also accommodate a variety of other affordable housing types.
So the the ice rink may very well end up in the hands of the local voters after all. Even many of the local hockey and skating fanatics can’t imagine that spending $15M for an ice rink makes sense. For some it may come down to having a place to live versus having a indoor rink to play on. Mammoth’s outdoor rink opened last Friday……
The same election in June of 2018 will likely have another run at a $65 million school bond. A similar bond initiative was tried in 2008 and failed. Many local residents remembered (and still remember) how the school district squandered bond money on luxury administrative offices and an elaborate football field. And further, many second homeowners may be facing diminished property tax deductions because of tax reform. So even though they can’t vote for or against the school bond, they may in fact become part of the lobbying. Even worse, the architectural firm who produced the cost estimates for the school district plan is the same one who worked on the police station and ice rink…..
Snow or not, the first half of 2018 is going to get heated in Mammoth Lakes.

The sale of 40 Snowridge Lane for $1,250,000. This is a large “spec” home built by a Mammoth contractor. I wasn’t part of the sale but I have been in on the drama since day one. I had discussions with the contractor about vacant lots in the Slopes subdivision area long before he chose this lot. It was clear he wanted to build a spec home. I’ve watched the ongoing construction including photographing the property last winter when the framed structure was buried in snow. During the summer I even produced my own brochure in anticipation of a buyer. In the last few months I discussed the value and potential selling price with the contractor. He thought it was worth well over $1.4M. He finally found a buyer. He told me it appraised at $1,250,000. And he is down the road….
The sale of a 1-bedroom in Lincoln House for $415,000. Yes, the unit has some nice improvements (it is only 600 square feet) and a stream of income, but that is $690 a square foot. If sales like this continue then future condo hotel development is a possibility. But up until recently that is what the 2-bedroom units have been selling for.
The Mammoth Ski Castle that was previously one of my Favorite New Listings closed for $1,200,000 cash. 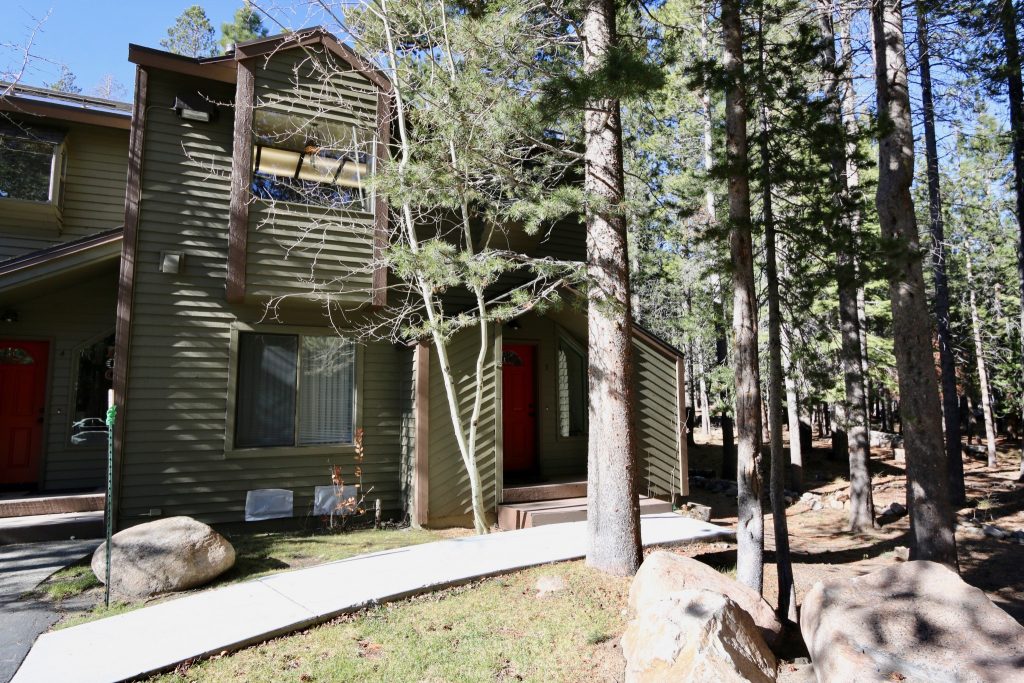 Like I have said many times, condo buyers in the Mammoth market have to consider older units that need updating and remodeling. There just isn’t enough new product. The key is finding units that have special and unique qualities and settings. Here is one, this is Forest Creek #5. It is located on the north west corner of the project overlooking the town’s bike path and looking out towards Sierra Star golf course.
This is a 2-bedroom / 2.75-bathroom end unit townhome with a private spa in the atrium, an upper deck, stack washer/dryer, a large storage room in back and private backyard. This is an original owner who has installed granite in the kitchens and baths. It has large Regency wood burning stove so no fireplace issues. There is also propane gas at the building for any gas retrofits. It needs to be cleaned out, painted, new flooring and a new owner’s touches. Excellent potential!!
​​​​​​​Listed at $399,900​​​​​​​

As tax reform continues down the path in Washington DC the real estate industry rumblings get louder. Personally, I’m surprised the big lobbying power of National Assoc. of Realtors (NAR) hasn’t been more influential in the matters of real estate related reforms including mortgage interest deduction (including none for second homes), property tax deduction, etc.
I’m reading about this daily and the latest from NAR is that they are predicting that real estate values will plunge in many areas due to this new set of tax reforms. And they predict the “most severe” impacts will be in California where nearly half the owner-occupied homes are valued at over $500,000 and 71% of them have a mortgage. And 49% have mortgages over $500,000. And 9% pay more than $10,000 in annual property taxes. NAR was even quoted that real estate values will go down an average of $56,000 with passage of the current reform.
Not all Realtors are freaking out. Some are asking how often buyers are buying just because of the tax benefits? Most report buyers have a much longer list of priorities and concerns. Others are taking a wait-and-see attitude. Some are thinking NAR should be more concerned about the health care/insurance for the members. And I would believe for many, this isn’t even on their radar. It is the holidays after all.
​​​​​​​The whole tax reform package has yet to be settled and some changes seem inevitable. But how many own in Mammoth for the deductions? Or justify continued ownership because of the tax benefits? For that matter, how many people will move out of California if their deductibility gets reduced? I haven’t heard any second homeowners panicking yet. I guess we will find out
And one commenter responded that it is just another case of; “When the tide goes out, we’ll find out who is swimming naked.”
Thanks for reading!

Mammoth Goes From Serene, To Weird, To Closed!   Market Summary:   March 1 -- March 15 The Mammoth Lakes MLS is reporting 18 real estate closings for the period ranging from a low of … END_OF_DOCUMENT_TOKEN_TO_BE_REPLACED

The Super Dry February Ends With A Teaser! Market Summary:   February 16 -- March 1 The Mammoth Lakes MLS is reporting 27 real estate closings for the period ranging from a low of … END_OF_DOCUMENT_TOKEN_TO_BE_REPLACED

We All Love Summer In The Mountains  -- Just Not In February!   Market Summary:   February 2 -- February 16 The Mammoth Lakes MLS is reporting 14 real estate closings for the … END_OF_DOCUMENT_TOKEN_TO_BE_REPLACED