The Mammoth Lakes MLS is reporting 14 real estate closings for the past two week period ranging from a low of $246,000 to a high of $885,000. Of the 14 escrow closings, all 14 were financeable properties and 10 were conventionally financed. And just like the previous period, 10 of the 14 closings were condominiums selling under $500,000. The 10-year Treasury yield dropped significantly again to 2.414% and mortgage rates are now at 15-month lows. International money is flowing into “safe” U.S. long bonds.

At the period’s end the condominium inventory is down another two (2) to 89. There were 11 new condo listings to the market and none have sold yet. Included in the new listings are a few “rarities” and three 2-bedroom condo hotel units. The condo hotel pricing appears aggressive to the side of the sellers, but a few recent sales have sellers thinking the value is there. We’ll see. The prime rental season is now winding down.

The inventory of single-family homes is down four (4) to 31. A couple of homes went to escrow, one was pulled off the market, and few price reductions in the <$1M part of the market. And the least expensive home on the market is “new” but it has been on the market for substantial DOM in the past.

The total number of properties in “pending” (under contract) in Mammoth Lakes is up four (4) to 58 at period’s end. That includes four (4) homes listed over $1M. Of the 58 properties in “pending,” there are 26 in “Active Under Contract” status (formerly “back-up”). The total number of pendings in the aggregate Mammoth MLS (which includes outlying areas) is up two (2) to 76.

The past two weeks have seen a variety of weather and ski conditions on Mammoth Mountain; from fresh snow to spring-like conditions to some amazing “wind blown” conditions earlier last week. The coverage on the Ski Area is outstanding. Canyon Lodge and Eagle Base are scheduled to stay open for another four weeks. The spring breakers and families are starting to cycle through. Mammoth has been very busy with tourism. The kids appear to be having a blast with all of snowpack in town; lots of sledding, snowman building and miscellaneous snow-play.

I’ve been down at the Mammoth Airport a number of times in the last week and it is busy, very busy. This weekend there were at least 25 private planes/jets on the tarmac (the weather was ideal for flying). Even if more of the commercial traffic eventually ends up in Bishop, Mammoth is destined to remain a busy general aviation airport. Town personnel at the airport told me that the daily flights from Denver have been “surprisingly” busy and that the local residents are using the flight to link to/from the major hub.

The YotelPad reservation process opened up on Friday. For now they are taking Priority Reservations with $10,000 deposits. The actual selection event is scheduled for “early summer” and will likely be held in southern California. In the meantime the reservation holders will receive extensive information about the project (legal documents, HOA information, rental management information, etc.) and specific unit availability. The deposit will certainly weed out the casual lookers. As a side note, the Park City YotelPad (which is under construction) appears to still have about 40 units available. The demand for Mammoth is purportedly stronger than Park City. But we will soon find out.

Last week’s Mammoth Times carried an opinion piece from local Town Councilman Kirk Stapp addressing the current status of the Ice Rink/MUF. The Council recently approved a $60-80,000 consulting contract to scope and budget the project to (try to) make it economically viable. Stapp voted No on the proposal. Basically, the Council and staff still can’t figure out that building million dollar home with $500,000 is impossible, especially in a construction-challenged environment like Mammoth Lakes. The Town is trying to build a $22M project with $13M.

Even worse, as Stapp points out, the Town has really ignored the overall economic analysis of the project AND how it fits into the greater budget needs of the community. (As an aside, the town roads are a mess after this winter — potholes and separating asphalt everywhere. That’s what happens when crack sealing and general maintenance are ignored while staff is gazing at the stars.) Stapp doesn’t even get to the fact that a big chunk of the available $13M is a $5.5M bond that presumably the Town is already servicing the debt on. But he does quote the Taxpayers Protection Alliance “paying interest on bonds for something as non-critical as an ice rink could hamstring funds (for necessary items) for years.”

Stapp’s piece also points out that from 2016 to 2018 the number of ice rinks in the U.S. declined from 2,800 to 2,000. “The cost of municipal rinks to local governments has been a hot topic amongst tax watchdog groups…..the proposed Mammoth rink is troublesome on multiple levels,” according to the Alliance. Meanwhile, one Council member believes Mammoth Creek Park West is the “superior location” for the proposed ice rink. Brilliant. Genius. Quite frankly it is a superior location for just about anything; the beautiful creek drainage, flat topography, perfect solar aspect, tremendous views, proximity to the commercial district, etc.. It could be the most desirable piece of property in Mammoth Lakes.

An article on cannabis stores in Mammoth brought a couple of interesting quotes. Town Finance Director Rob Patterson estimates that Mammoth will produce about $40,000 in cannabis tax this fiscal year but that overall the tax revenue for the State won’t be as good as expected. “We’re actually enjoying a pretty healthy business in town. We’ve got two good business people who have done a lot of work to do everything correctly.” And police chief Al Davis said he had “no issues” so far with the cannabis stores. “In 33 years of police work, I have never been to a domestic incident where people were high on pot.”

The State is proposing changes to sport fishing regulations that could allow more access to fishing especially in winter. In an editorial in Western Outdoor News, they point out that encouraging fishing in snow/winter conditions in the rural eastern Sierra could become a public safety nightmare. They are right. And all you have to do is watch the feed on Snowbrains.comand it is truly amazing how many people die in avalanches in North America. People just don’t respect snow, ice and avalanche threats. Mono County Search and Rescue is already busy enough.

The California Department of Water Resources says the Sierra snowpack is currently 150% of normal for only the 11th time in the last 70 years (March 1 reading).  Regardless of how the winter of 2019 goes down in the books the snowpack in the eastern Sierra is impressive right now. 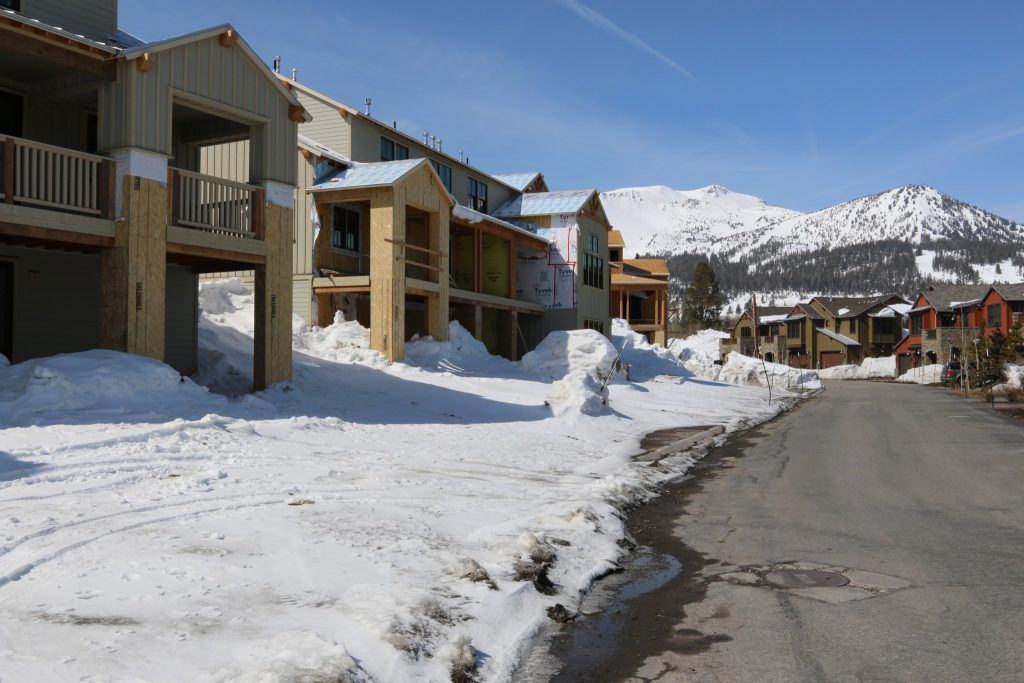 Creekhouse is Phase 7 of the Snowcreek Resort development. They just released some new units during the period. There are a total of four 4-unit building under construction and the units should be finished later in the year. The project is adjacent to Mammoth Creek and there are amazing mountain views depending on the unit and building orientation. Great sun too. Interestingly, two local Realtors have recently chose to make Creekhouse units their personal homes. That is telling.  My favorite floorplan is the “Morrison.” It features 3 bedrooms all with en-suite bathrooms and all three have private decks. The garage and great room have incredible utility for mountain living. Total square footage is 2,244. That floorplan starts at $929,000. There are smaller and larger floorplans available.
Priced from $829,000
Courtesy of The Snowcreek Property Company

I am increasingly being asked if the present real estate environment has any similarities to 2006? So let me bounce some ideas around. There are similarities but there are critical differences. In 2006 values were sky-high compared to today, especially if inflation is calculated in. And the leverage was far greater too, at least on face value.

One thing that is eerily similar is the market timing and hyperbole surrounding Mammoth Mountain’s change of ownership back in 2005 and now. Quite frankly, the Mammoth real estate market was stalled in the summer of 2005. The market was taking a pause. We had a strong run from 2000 to 2005. The condo hotel properties were new at Eagle and were under construction in the Village. By 2005 the Westin Monache was the epicenter of hype. There were construction cranes in Mammoth through that whole period and nothing can move a real estate market like the optics of construction cranes.

In October of 2005 the Starwood acquisition of Mammoth Mountain was announced. That launched the market another 10-20% before the financial crisis hit. Proposals and hype for the “W” hotel and a Ritz-Carlton in the Village just fueled the fire. At that point many “non-Mammoth” type people entered the market on speculation. They weren’t ski or snowboard oriented or had any interest in the backcountry, etc.. They were buying on the speculation that Mammoth was really becoming Aspen west. And mortgage lending was so loose that they couldn’t help themselves. The Mono County Assessor has stated that spring of 2006 was the peak of the Mammoth market, but there were sales into 2007 that eclipsed that period.

We are now one IKON Pass into the Alterra ownership and there is underlying hyperbole in the Mammoth real estate market based on the new ownership. But Alterra, so far, is committed to making real capital improvements to the Ski Area. Starwood did the opposite. Starwood wanted to develop real estate for profit. We’ll never know if they would have actually improved the ski experience if everything had gone as planned. Alterra also brings the stability of other resorts and the conglomerate. That includes insurance against drought or other regional issues. And the IKON Pass looks to be wildly effective and successful.

The short term rental (STR) game has changed dramatically since 2006, and that brings a certain level of stability for many condo owners. We’ll see how it holds up during an inevitable recession. But the massive marketing effort (and dollars) by the Town and the Airbnb effect and the dynamic pricing models have brought solid streams of income for many condo owners. Mammoth is still short hospitality beds.

And since 2006 the level of construction here in Mammoth has been almost stagnant, especially pure development projects. The supply of available properties has not increased like it did from 2000 to 2006. Most existing properties are still selling below replacement value and are selling in the 70-80% range of their 2006 values.

In the past 10 years we have also seen plenty of cash buyers in the Mammoth market (although fewer in the past two years). Where the cash is coming from is largely unknown, and whether there can be claims against it in the future. Or whether these cash purchases now have underlying debt. But plenty of cash purchases of Mammoth real estate have flowed from stock market profits.

With all that said, an economic downturn can certainly impact Mammoth real estate values. It has happened before. It will happen again. But to what extent remains the mystery.

The Most Subdued Holiday Period In Decades, New Snow Coming And IKON Blackout Over!   Market Summary  December 13 to January 3 This report is for the past three weeks. Not only … END_OF_DOCUMENT_TOKEN_TO_BE_REPLACED