USA Olympic Positions Filled At This Past Weekend’s Gran Prix!

The  Mammoth Lakes MLS is reporting 12 real estate closings in Mammoth for the period ranging from a low of $290,000 to a high of $1,225,000. Of the 12 closings, 11 were financeable properties and seven (7) were conventionally financed. Eight (8) of the 12 sales were condos selling under $500,000. With the 10-year Treasury heading over 2.6% the 30-year mortgage rate for most Mammoth purchases is now heading into the mid 4% range.  Higher values and higher rates will make properties less affordable. We’ll see how long it stays up, or if it goes higher.

At the period’s end the condominium inventory is up 11 to 63. There are now 10 condos listed under $300,000 so the low-end availability has improved but many of these condos were selling for $75,000-100,000 less some 14 months ago. There were 23 new condo listings in the period and six (6) are already under contract and in escrow. This is traditionally a slower time of year for the Mammoth real estate business; the holidays are over (and the “urgency” is gone). But some condo owners are seeing the low inventory and higher prices as a good time to try to sell. They may have to wait until activity returns in spring. Or not. But quality properties are selling quick if they are priced properly. An asterisk on the market is there are numerous “move-up” transactions occurring – the same party is a current buyer and seller in the Mammoth market. Interesting timing for sure….

The inventory of single-family homes is down three (3) to 29. There are potential buyers looking at homes on the market but the inventory is lackluster. There are still only three (3) homes listed under $625,000.

The total number of properties in “pending” (under contract) in Mammoth Lakes is up eight (8) to 50 at period’s end. So the holiday period created some sales. Not a big surprise but somewhat out-of-the-ordinary. Of the 52 properties in “pending,” there are 42 in “Active Under Contract” status (formerly “back-up”). The total number of pendings in the aggregate Mammoth MLS (which includes outlying areas) is up nine (9) to 61.

The Martin Luther King holiday last weekend was packed here in Mammoth. Maybe the busiest period of the whole four week holiday period. There was some fresh snow and plenty of people of appeared to have the three-day weekend off of work. There was an impressive stream of vehicles pouring out of Mammoth on Monday.
This weekend was the annual U.S. Grand Prix and it featured the best snowboarders and freestyle skiers from the USA competing for final spots on the Olympic team. The event appeared on NBC television in several segments including the first-ever (for Mammoth) nighttime halfpipe events. With thin snowpack throughout most of the country, Mammoth was fortunate to have a complete halfpipe facility for the athletes to compete on. It has been weeks in the making. The weather cooperated for the most part. Outstanding television exposure to a target audience.
With President’s weekend a month away, the next four weeks should be opportune to come and enjoy some uncrowded skiing and snowboarding. And a good time to look at real estate.
The new Ski Area conglomerate has finally settled on a name; Alterra Mountain Company. Mammoth Resort’s old ski mountains will retain their same names and identities as will all of the other resorts in the new company. Still nothing about next year’s ski pass plans, or anything else of substance…
The retail recreational cannabis topic consumed a substantial portion of last week’s Town Council meeting. The Council has kicked-the-can on this and that is quite surprising. This is a major tax-generating opportunity for the Town. And it can’t be ignored (of course we have two lame ducks). But missing an opportunity to generate more taxes from our visitors?? How unlike them. The public recreational dispensaries in Reno generate full sales tax (~8%) and an additional 10% on all sales. The extra taxes don’t seem to be stopping the consumers.
The owner/operators of the two local medical dispensaries pleaded with the Council to take action and allow recreational sales at their locations. Wave Rave owner Steve Klassen reported that he has had “hundreds of inquiries” about where to acquire cannabis in Mammoth Lakes. He even posited that he should give it away to his customers as a perk. Two Council members wanted to enact an emergency ordinance to get the ball rolling. One member stated that the Town has “mishandled” this whole situation and has driven the consumer to the black market. The subject will come again at the February 7 meeting. I would suggest they tax it similar to Reno with the 10% going to local law enforcement.
I know how the State Board of Equalization and the Mono County Tax Assessor feel about “escaped taxes.” It is their job to pursue every nickel possible. The Town has developed a history of doing the same. Losing this opportunity seems perplexing. For example;
The Town has been in discussions with a company by the name of Host Compliance. Their enterprise monitors the short term rental business for cities. They offer a variety of services. The Council approved a narrowly focused contract for them to start monitoring the online advertising of Mammoth rentals starting in February. Depending on how that goes a future consideration is for an auditing program that monitors individual property rental calendars and rates and estimates expected revenues. TOT enforcement is moving to a Big Brother scenario here in Mammoth Lakes.
Meanwhile the Town reported that they opened eight new enforcement cases last quarter that yielded $136,000 in collected violations.
The Town is also winding up their Quality of Life (QOL) ordinance driven crack-down on problematic lofts in nightly rentals. They’ve done a full circle back to the local Realtors in the past year after receiving input from the Town’s Building Advisory Committee and the local Contractor’s Association. The Town is now looking for final comments from the local real estate industry. I will be making comment about some of the specific lofted floorplans in Mammoth Lakes. Under the current proposal some of these units will be compromised to some extent. And yet these units have been rented regularly over the past four+ decades and there is no history of problems. We’ll see.
And a recent study produced by Brown University reports that snowboarders are three times more likely to sustain injury while snowboarding than skiers are while skiing. I just wonder how many of the skier injuries were caused by snowboarders, and vice versa?

Not too many interesting sales to comment on. An oversized Studio on the sixth floor of the Westin Monache sold and closed FAST at $290,000.

Condo sales at Sierra Park Villas, The Summit, and Chamonix show that buyers will move quick and pay substantial prices for units that are remodeled and in “turn-key” condition.
A 2-bedroom unit at The Bridges closed for $469,000. The same exact unit closed in summer for $462,000. The seller decided they wanted a larger unit in the project.
A large 3-bedrom + loft / 4-bath /2-car garage townhome at Stonegate closed for $1,225,000. These units located on the Sierra Star golf course and just below the Village live like a beautiful home with the ability to rent on a nightly basis. This unit had a strong rental history and was in very clean condition.
Which leads me to….. 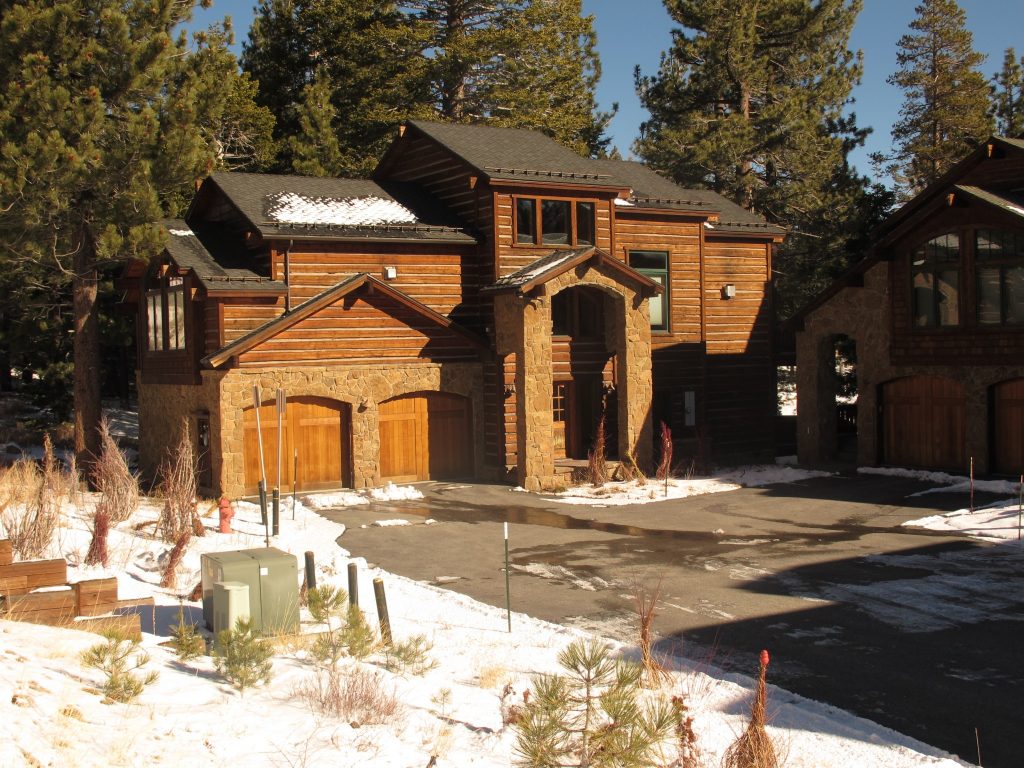 The Stonegate project was built in the mid-2000’s and was designed by long-time local architect Elliott Brainard. I sat on the Mammoth Lakes Planning Commission with him in the early 1990’s and have plenty of respect for the way he thinks. The project was built by local contractor Al Preschutti who also has an outstanding reputation. Just go inside these units and you can see the quality of design and craftsmanship. The living area of this unit overlooks the greens on hole #6 of Sierra Star golf course. We marketed an REO property right next door a couple of years ago so I am quite familiar with the location.
​​​​​​​
So this is unit #14, a 3+loft/3.75/2-car property. It has an unique location at the end of the project and nearest to the Village. There is a smaller vacant (and forested) property to the north. Because of the adjacent lot’s size it is somewhat constrained for major development. It is also part of the Resort zone of the Lodestar master plan and not part of the North Village Plan. It is also right on Minaret Road where the new events site is. This property has been a VRBO rental for the past 10 years so it has strong repeat clientele.
​​​​​​​Listed at $1,350,000​​​​​​​
Listing courtesy of Mammoth Realty Group

Zillow.com and Zillow Group have been hit with an antitrust lawsuit in New Jersey. Reading through some of the analysis of the case certainly reinforces why I tell real estate consumers not to wholly rely on the Zillow site for information. There is great information on the site and it is consumer friendly. But consumers are somewhat misled to think that the site is designed for them. It isn’t. Zillow is a sophisticated plan to extract money from real estate agents, both those that are earning commissions and those that want/need to.
​​​​​​​Agents pay major fees to Zillow to be “Premier Agents” within certain zip codes. Fortunately for Mammoth agents that only includes one zip code. But Zillow dilutes the Premier Agent status as time goes on. And charges more. And alters the algorithms to their favor. They also manipulate the available properties that appear and continue to run properties that have long sold and closed escrow.
The New Jersey litigation is specific to the placement of Zestimates (the estimated property value based on all of their data) in their advertising. The lawsuit claims that Zillow manipulates and conceals the Zestimates based on the contractual relationships it has with certain brokerages (and presumably certain agents). It is an interesting case in this modern era of real estate information distribution.
But it also reinforces the Realtor.com television commercial series that features “they wanted this house too, but they didn’t use Realtor.com.” I always recommend buyers watch one of the Mammoth broker’s websites (like mine) for this exact reason. The “feed” known as IDX (Internet Data Exchange) is almost direct to the local broker’s sites and Realtor.com. After watching Zillow for a few years I realized they didn’t direct feed, they were manipulating the data. That is why the TV commercials are actually spot-on. “They wanted this house too but they were using Zillow…..”  This lawsuit may be the first of many.
And now Zillow is going to have another major competitor; Facebook. The Mammoth Lakes Board of Realtors just agreed to give Facebook an IDX feed (after much pressure from Facebook). So now all of the Mammoth MLS listings will soon show up there. And of course they will manipulate the data for their own benefit (imagine that). And Facebook will develop new strategies to separate the local real estate agents from their commission checks just like Zillow. And Zillow and Facebook are going to go head-to-head.
Meanwhile, I’ll keep my IDX feeds nice and clean and I’ll keep trying to present the best, most straightforward and up-to-date information on the Mammoth real estate market.

The Smoke Lingers But Visitors Are Anxious To Come And Play!   Market Summary  September 27 to October 18 This report is for the past three weeks. The Mammoth Lakes MLS is … END_OF_DOCUMENT_TOKEN_TO_BE_REPLACED

Mammoth Is Smoked Out and Very Quiet, But Gets a Weekend Reprieve! Market Summary  Sept. 13 to Sept. 27 The Mammoth Lakes MLS is reporting 43 real estate closings for the period … END_OF_DOCUMENT_TOKEN_TO_BE_REPLACED